On 3 August, Percy turned 24. Two days later he reported to Anzac Cove, where he stayed for 12 days, until evacuation on 17 August, suffering from 'nervous breakdown'.
From service record:

Soldiers of the old army and the new.
Some of you have already won imperishable renown at our first landing or have since built up our foothold upon the peninsula, yard by yard, with deeds of heroism and endurance. Others have arrived just in time to take part in our next great fight against Germany and Turkey, the would-be oppressors of the rest of the human race.
You, veterans, are about to add fresh luster to your arms. Happen what may so much as least is certain.
As to you, soldiers of the new formations, you are privileged indeed to have the chance vouchsafed you of playing a decisive part in events which may herald the birth of a new and happier world. You stand for the great cause of freedom. In the hour of trial remember this and the faith that is in you will bring you victoriously through.

After the engagement on our left yesterday the enemy kept up an irregular fire on our trenches up till 0935. The remainder of the 24 hours was quiet. The ruses practiced last night failed to draw very little fire from the trenches in front.

Trench Mortar fired several bombs into position pointed out by our observers where enemy’s machine gun was located. Enemy during the night used considerable number of star shells mostly white.

With the exception of one heavy brush with fire from the enemy’s trench on our front has been light. Otherwise a quiet 24 hours.

Enemy’s bomb proofs have not been added to since yesterday. Whenever a burst of fire occurred from our left enemy threw up star shells. Trenches and recesses deepened.

Very quiet 24 hours. Deepened trenches and recesses. Enemy does not appear to be doing any further work on his trenches.

A quiet 24 hours, but the fire from enemy’s trench in front was heavier than for the previous 24 hours. Deepened trenches and saps and widened Sap No 8 (?) in order to use it by stretcher bearers.
Casualties Nil

Enemy were observed carrying bushes along the trench apparently to be used for overhead cover. The ruse last night failed to draw much fire. Deepened trenches and saps.
Casualties – one slightly wounded.

About 0100 our artillery fired a few shots in what appeared to be the direction of the Olive Grove. In reply a few small shells were fired at our trenches from the direction of Pine Ridge. No damage was done. The officer on duty at 0100 received a report that a body of the enemy were moving from their left flank towards Lonesome Pine. A sharp lookout was kept but nothing unusual was observed. Deepened trenches and saps.
Casualties one wounded

1. At 1930 yesterday liquid bomb fired from enemy’s trenches ?? along from GUN RIDGE landed at number 10 sap. The bearing to the ? was taken and forwarded to Brigade Headquarters.
During the night four bombs were fired from the same position.

Summary of events for previous 24 hours:-

1. Very quiet
2. Enemy were throwing up earth during the day of a very dusty nature which appears to be from the bottom of the trench.
3. Casualties one.

"Hamilton scheduled the Suvla landing for 6 August, and ordered two simultaneous diversionary attacks to occupy the Turks, at Helles and Anzac. ..

…To the forces already at Anzac, Hamilton added 13th Division, which with 29 Indian Brigade gave Birdwood some 40 000 men. The reinforcements were slipped ashore at night on 4 - 6 August and the troops secreted in newly constructed trenches and caves, to conceal their arrival from the Turks. The plan was for an attack at Lone Pine, to the south of the ANZAC bridgehead, utilizing a secretly constructed underground tunnel which would allow the assaulting force to debouch almost directly into the Turkish positions. Having convinced the Turks that this was the main attack, after dark the principal assault would be made further north, towards Sari Bair, which was hoped to be in ANZAC hands by the following morning."

The 4th LH was not directly involved in the attack on Lone Pine, but did provide cover.

29 July: The 4th LH replaced the 7th LH's forward positions at Ryrie's Post and two days later supported West Australia's 11th Battalion in an attack on what became known as Leane's Trench…For the next week the Regiment was given the perhaps odd responsibility of drawing the enemy's fire between 2 and 3 am every morning. This involved 'demonstrations' at the appointed time with much yelling and rattling, flares being fired and even some shooting and throwing of bombs. The idea was to keep the enemy on his toes and hopefully wear him down somewhat. Although annoying to the Turks doubtless the troopers of the 4th Light Horse Regiment did not find much rest in the activity either.

6 August: Leane's Trench became a point of particular interest to the Turks who at 4.30 am on 6th August made a concerted attack on the Australian infantry defenders. The Light Horsemen became heavily involved in the ensuing counter attack which resulted in the loss of five Light Horsemen killed and five wounded, most if not all, from A Squadron…Late the same day the Regiment supported the fateful attack on Lone Pine with covering fire on Pine Ridge and the Turkish Despair Works…Orders were then received to support an 8.30 pm attack by the 5th Light Horse on Green Knoll and Balkan Gun Pits. Thankfully the weary troops were to be told at 8.00 pm the attack was cancelled.

There was little respite. At 1.20 am the following morning the 4th Light Horse Regiment was again tasked with a 'demonstration' against the Turks with bayonets fixed, and much rattling, cheers and 'cooees' echoing from the Light Horse trenches. Apparently many troopers were of the belief that this demonstration and the earlier cancelled attack had been part of an accidentally aborted charge, but this was not the case. The 6th August had been a costly day for the 4th Light Horse Regiment in terms of life and limb….

8 - 21st August: the 4th LH remained in the Ryrie's Post position. Various ruses were carried out to draw the enemy's fire and generally harass him. All the time the troopers worked to deepen and extend the trench system which had become their home. On the 21st C squadron plus a troop from A squadron relieved the 7th LH in the trenches at Lone Pine where the next day they had to fight hard to withstand a heavy Turkish attack comprising concentrated shelling , bombing, machine gun and rifle fire."

And so it went on…the 4th LH being moved around in various positions covering Ryrie's Post and Leane's Trench.
AWM photos:
4th Light Horse Cookhouse, Gallipoli. (P00859.002)
"Army cooks outside the dugout which served as the cookhouse for the headquarters of the 4th Light Horse regiment, 1st AIF. Steam rising from one of the dixies in front of the men indicates that a meal is being prepared."
Observation team at the southern end of Leane's Trench (P01436.003)
"Possibly observing the attack at Lone Pine. Two man team in full battle dress including webbing. Camoulflaged periscope and camouflaged headdress."
Looking along the beach from Ryrie's Post (H00196)
"The Turkish trench runs across the ridge in the foreground."
Dugouts rising from the beach at Anzac Cove (C01129)
View of Anzac Cove taken from the jetty (A02645)
Sunset over the Dardanelles (11 Aug 1989): 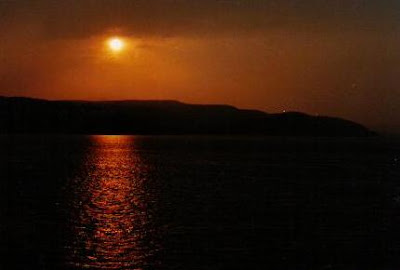 The Sphinx, the Nek and Walker's Ridge: 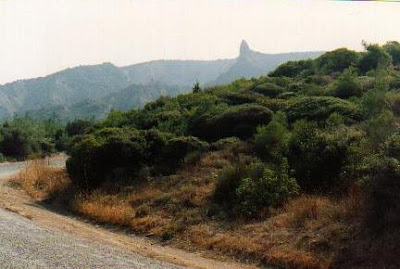 The Sphinx, The Nek and Walkers Ridge from Ari Burnu cemetery:
Anzac Cove: 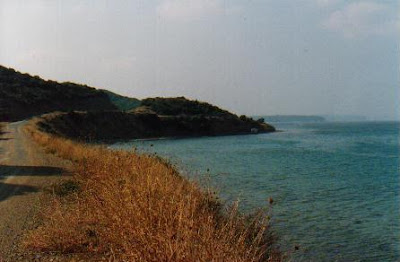 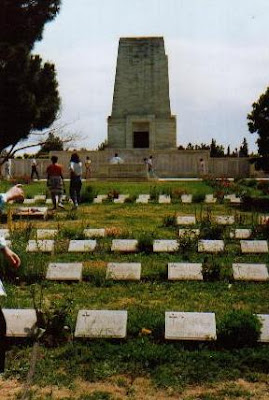 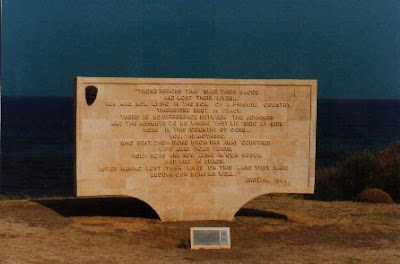 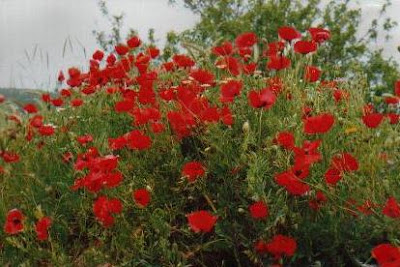