My grandfather, Percy Smith ("Gargoo") joined the 1st Australian Imperial Force on 2 March 1915, as a private in the 4th Light Horse Regiment.

Gargoo was born and bred a 'country boy', who must have had much experience with horses. He was taken into the 4th Light Horse Regiment, but never fought as a Light Horseman. After the 4th LH was split up in Egypt in early 1916 (half went to Palestine where they took part in the Charge at Beersheba), Percy Smith became a Driver in the Artillery. His main work in France consisted of being in charge of a team of horses and carting the artillery and ammunition up to the trenches.

During his lifetime, like so many others, he rarely, if ever, talked about his experiences in World War One. He was away from Australia from May 1915 to early 1919 (he embarked for Australia from England on 2 January 1919) - just under 4 years. During that time, he saw action at Gallipoli and in France, both Flanders and the Somme. There were a few periods of respite, due to illness after Gallipoli ('nervous breakdown'), which saw him recuperate in Malta and Egypt, mumps and dysentery (Egypt), and leave in (England). In May 1918 he left France and was posted to the Reserve Australian Artillery Brigade in Heytesbury, England.

This is "his story" as far as I can reconstruct it. 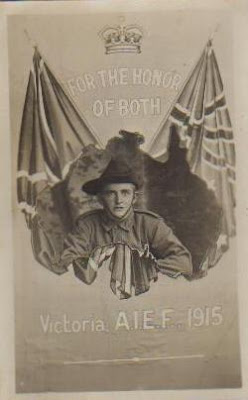